IPv6 addresses in a group get 'mangled' after editing (:: being interpreted as a delimiter)

IPv6 addresses get ‘mangled’ after editing groups of bgpPeers.bgpPeerIdentifier which include a number of IPv6 addresses. When the group is intially created with multiple IPv6 entrys it is saved to the database correctly - all addresses appear in the correct format. If I then use the GUI to edit the group the IPv6 addresses all appear on the screen ‘split’ at the ‘::’ characters in the address. If I make a modification to the group (edit/add or whatever) it appears to interpret the ‘::’ character as some kind of delimter and when the group is saved it results in the following:

As an example the following might be the initial ‘pattern’ field from the ‘device_groups’ table for a given group:

If then edit the group in any way such as add another entry for address ‘1234::3’ and then save the group the field will appear in the database as follows:

Our current LibreNMS deployment is as follows:

Out of interest our previous LibreNMS deployment of 1.4.7 also had the same issue

The following is a screenshot of the Device->Manage Group> edit Group view looks like with the IPv6 address ‘split’ (this is represented by a space in the actual Database). This view appears only after the initial creation of the group is already done and you then attempt to edit the existing group 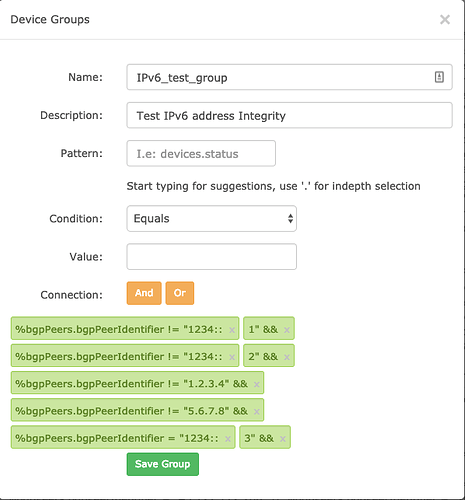