What are the expected poller times for a single host?

As it stands, a number of windows os devices configured to use all 3 snmp distributed pollers take between 70-140secs for a successful poll.
the rest average between 20-40secs.

The 140sec polls recently came about from a Librenms update (which looks to have increased CPU usage) however would like to know what everyone else gets to have a baseline.

If you go to a Device -> Graphs -> Poller you will see what module has increased time than before.

Yea, the polling times for OS was the most notable… linux OS being invariably 3 times faster in retrieving polls than Windows OS SNMP devices. 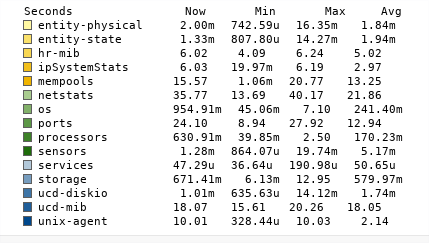 Is this an expected baseline though? Unsure what everyone else gets