Setting Alert for Dbm Level on a Port

Any one can help on setting alert rule for Dbm level on a port, the if the Dbm level Varies Alert as to triggered

the if the Dbm level Varies Alert as to triggered

I’m not sure what you mean by this.
LibreNMS should alert when a pet is out of range.
I had to adjust some thresholds on some devices, but if LibreNMS can read out the values it should work.

Hi Sorry for the delayed response

Maybe this is a basic Question. Say i have fiber port which have a power Dbm of -2dbm, If the power increases like to -5dbm a alert as to be triggered

How to set a rule for this

You can add rule from my example for sensors.sensor_class where you specify that you want to know only about dBm values. 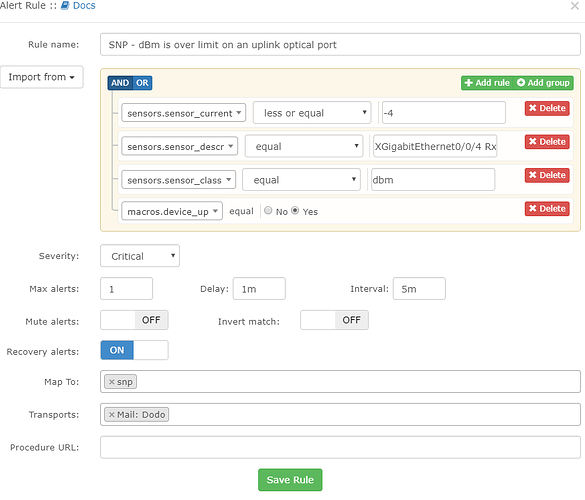 Is there a way to solve the problem when setting up the Alert function in LibreNMS, setting a series of different gates with the same receive power threshold and transmitting power threshold without having to enter each port in sensors.sensor_desr

I do it this way, my router is huawei. 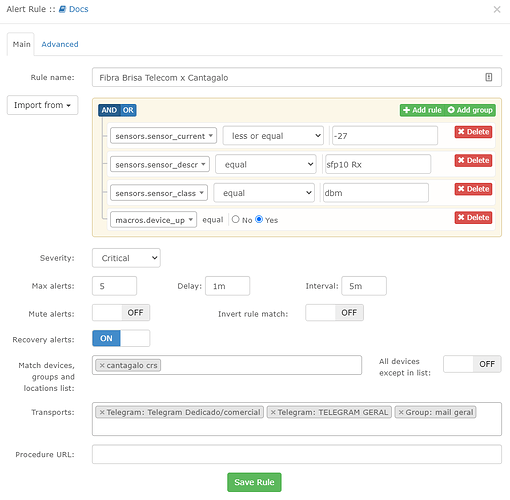 You can put the description corresponding to your interface, it will work normally.

For example, I have 10 ports of TenGiGaEthernet and 4 ports of GigaEthernet, how do I set up in LibreNMS. Setting up each physical port is time consuming.
My device uses Cisco.